The last of the Five Vital Fundraising Benchmarks is Donor File Growth.  But  “last” sure doesn’t mean least important.  In fact, it’s an essential metric for spotting trouble ahead.

Since donors are the principal asset for most organizations, this metric is essential to:

One of my favorite images to help organizations understand the math behind the Growth Score is the ‘Leaky Bucket’.  [this image can be found on page 13 in a free report called the Masterfile Audit and Action Plan  - or MAAP Report.  Calculate your leaky bucket starting here]

In FY18, this organization:

Did this organization’s donor file grow or shrink in FY18? 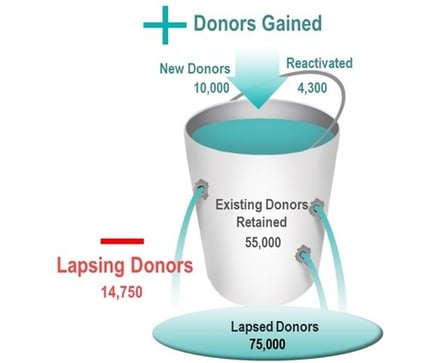 The Growth Score is file is .97.  The donor file size declined in FY18.

The donor file declined by 450 donors

Do you know if your donor file is growing or shrinking?   To protect donor file size, set a goal for each of the statements below.  Ensure that these goals have enough donors  to cover the ones ‘leaking out’ of the bucket.

I expect __________ new donors from last year to give a second gift this year [also called new donor conversion].

I expect __________ existing donors from last year to give again this year [also called existing donor retention – the water in the bucket].

And don’t forget to reach out to our DonorTrends team with any questions.  Our advice is complimentary as is the calculation of your Donor Growth Score.  Just contact us here.